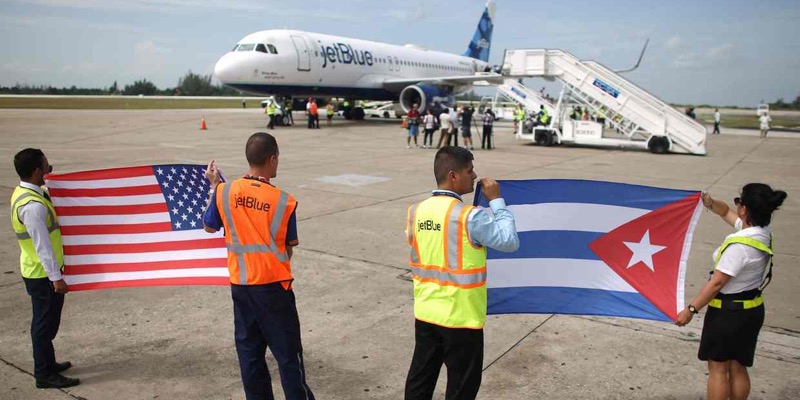 Image courtesy of The Guardian

History was made this week when US-Cuba flights resumed for the first time since 1961.  What’s more, the inaugural flight took off from Fort Lauderdale – the home of CTI PFT’s Florida campus!

On Wednesday, JetBlue Airways flight 387 made its journey from Florida to Santa Clara, Cuba, carrying 150 passengers.  The Airbus A320 was in stark contrast to the last commercial airplane flown from the US to Cuba, which would have been a propeller plane.

Despite taking off 20 minutes late at 10:05am, JetBlue flight 387 landed in Santa Clara at 11am to a water cannon celebration.

Passengers included a number of Cuban exiles returning to their homeland for the first time in decades.  Others were celebrating the return of affordable US-Cuba flights, now they no longer have to rely on expensive charter flights.  One said, “It’s freedom for us in that we no longer have to go to agents where they charge $500 for a ticket.”

As diplomatic relations continue to improve between the US and Cuba, the reinstatement of commercial flights between the two countries marks a huge step forward.

JetBlue plans to operate seven flights per day on the Fort Lauderdale-Santa Clara route, as well as flights to Camaguey and Holguin.  The airline will also serve Havana via Fort Lauderdale, New York JFK, and Orlando in due course.

However, JetBlue is not the only commercial airline ready to reinstate the former service of US-Cuba flights.  American Airlines will offer flights from Miami to Holguin and Cienfuegos from 7 September.  And CTI PFT students will be excited to learn that Silver Airways (one of our airline partners) has already relaunched its flights between Santa Clara and Fort Lauderdale.

With a number of our students choosing to work for these commercial airlines – especially Silver Airlines – some of you might even make the flight yourselves one day!