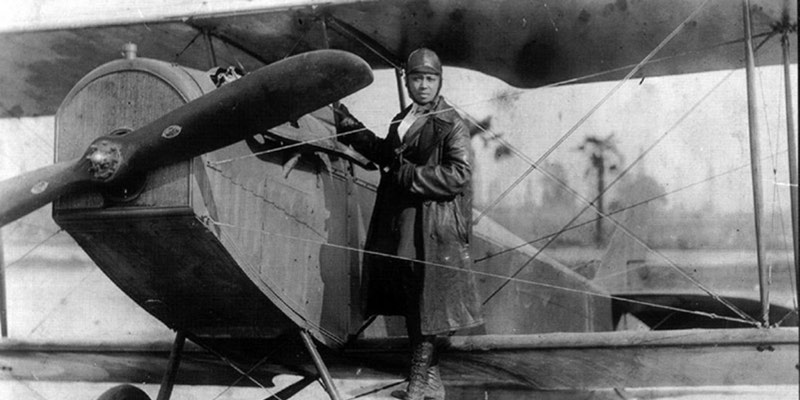 How much do you know about Bessie Coleman? Read on to learn all you need to know about this remarkable woman – the first of African-American and Native American descent to hold a pilot’s license!

Bessie Coleman was born in Atlanta, Texas on 26 January, 1892. One of thirteen children, Coleman’s parents were George and Susan, both of whom were sharecroppers and the children of slaves. Susan was African-American, while George was almost entirely Cherokee with some African-American ancestry. After the family moved to Waxahachie, TX, six-year-old Bessie started school. Despite having to walk four miles every day to get there to study in this one-room, segregated school, she loved learning and quickly established herself as a brilliant math student.

However, her education didn’t come without its interruptions. Every year, the school closed to allow the students to assist their families with the harvest. What’s more, when Coleman was nine, her father left home to find better work opportunities. With her mother and two older brothers going out to look for work, Coleman was left to raise her younger siblings. However, she entertained them by reading aloud from books, and promised her mother that she’d always “amount to something.”

After completing all eight grades of school, Coleman took up work as a laundress to save money and study at university. By 1910, she’d earned enough and enrolled at Langston University, Oklahoma. However, she ran out of money after one year, forcing her to return to Texas.

Undeterred, Coleman worked as a laundress again, saving up enough to move to Chicago in 1916 with her older brother, Walter.

Learning to fly in the face of adversity

Coleman was working as a manicurist when she first developed an interest in aviation. Having heard stories from pilots who’d returned from World War I, she was inspired to take up a second job so she could afford to train more quickly, and began working in a chili shop.

However, with flight schools and pilots at the time refusing to train women or African-Americans, the route was not going to be easy. Coleman took advice from the founder and publisher of the Chicago Defender, Robert S. Abbott, and studied abroad with the financial backing of the newspaper and Jesse Binga, an African-American banker.

After qualifying, Coleman honed her skills with an ace pilot based near Paris, before returning the US in 1921 as a sensation. She was adamant she wanted to make a living with her new skills, and the only option open in those days was as a stunt flier – aka a barnstormer! This would take a lot more training, so when Coleman couldn’t find anyone in Chicago to train her, she returned to Europe – training in France and the Netherlands. Here, she met Anthony Fokker, the famed aircraft designer, visited the Fokker Corporation in Germany and trained with one of their chief pilots!

Coleman was finally ready to entertain the crowds, and returned to the US to begin working as an aviatrix. Flying army surplus aircraft, she quickly gathered many admirers – both black and white – and earned the nickname “Queen Bess.” She was daring, she was bold, and she was incredibly skilled.

Throughout her career, Coleman earned enough to buy her own plane. She had a street named after her in Orlando, FL. She was even offered a role in a movie. There was one dream she didn’t quite fulfill, however. Coleman had always dreamed of setting up a school for young black aviators, but tragedy struck in 1926 when she was thrown from her plane at 2,000ft.

Planning a parachute jump from the aircraft the following day, Coleman was traveling as a passenger and wasn’t wearing a seatbelt, as she was examining the terrain below from the cockpit sill. Suddenly, the aircraft went into a dive and spin, and Coleman fell from the plane. The pilot – her mechanic and publicity agent, William D. Wills – was killed when the plane hit the ground.

Coleman’s admirers were distraught, and no fewer than three memorial services were held in her honor.

Although Coleman’s life was cut short, she went on to inspire many African-American aviators after her, including Lieutenant William J. Powell. Monuments, buildings, and roads around the world are named in her honor. In 2006, she was inducted into the National Aviation Hall of Fame.

Are you inspired by aviators like Bessie Coleman to take your place in the cockpit? If you are, we’re ready to help you train! Get in touch to get started today.