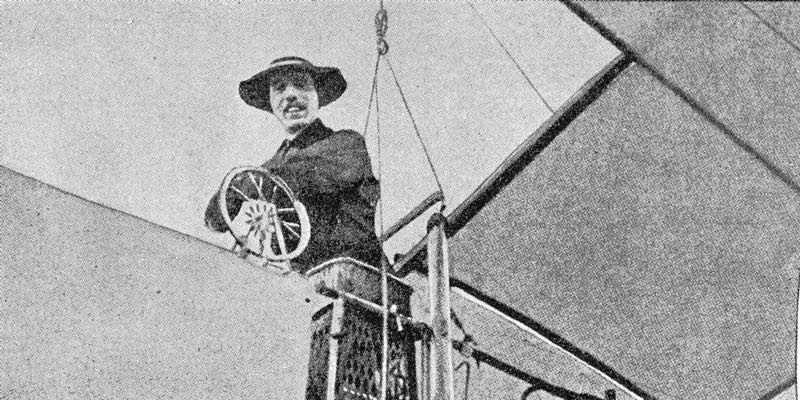 With the Rio Olympics well underway, how many CTI PFT students spotted a Hero in Flight at the Opening Ceremony?

As the Maracanã Stadium played host to a retelling of Brazil’s history, one segment saw white boxes pieced together to form a plane which flew out of the stadium.  But what was the plane – and who was its notorious pilot?

The plane was the 14-Bis, and the pilot Alberto Santos-Dumont – the man Brazilians recognize as the first to fly a heavier-than-air aircraft.  Although we attribute that title to the Wright Brothers, Brazil and France dispute the extent to which they qualify for the title.

According to the Federation Aéronautique International (FAI), aircraft needed to “take off from the designated area by its own means” to qualify as the first flight.  As the Wrights used a launching rail to catapult the Flyer, some critics argue these stipulations were not met.  So does the title lie with Alberto Santos-Dumont instead?

Born in 1873 in Palmira, Minas Gerais (a state in south-east Brazil), Santos-Dumont was the youngest of seven children.  His father was an engineer of French descent and his mother came from a rich family of coffee producers.  Santos-Dumont inherited his father’s love of machinery, learning to drive the plantation’s locomotive and steam tractors while still a boy.

Santos-Dumont first dreamt of flying while gazing at the Brazilian summer skies above his father’s plantation, taking this dream to Paris when his family moved there in 1891.   By the turn of the century, he had already designed and flown a host of balloons and airships, and in 1901, won the prize for the first return flight from the Parc Saint Cloud to the Eiffel Tower in under 30 minutes.

Now a celebrity, Santos-Dumont could be spotted flying his airships around Paris (even landing at cafés to stop for lunch!), but it wasn’t long before he turned his attention to airplanes.  He refined his fixed-wing design and, on 23 October 1906, flew 14-Bis for 60m at a height of about 17ft – the first flight recognized in Europe by the Aéro-Club de France.

Santos-Dumont continued to make history, setting the first world record recognized by the FAI when he flew 220m in 21.5 seconds.  He later designed the Demoiselle, the world’s first series production aircraft, and even inspired the wristwatch when he asked Cartier to design a watch he could check while flying!

Sadly, Santos-Dumont’s later life was marked by solitude and declining health.  Accused of being a German spy during WWI for his strange accent and astronomical telescope, he left France for São Paulo, Brazil.  He was diagnosed with multiple sclerosis, leading to depression, which was deepened by his despair at the use of aircraft in warfare.  In July 1932, Santos-Dumont took his own life aged 59.

In Brazil, he is remembered as a hero, with places and monuments named in his honor – including the town of his birth and Santos Dumont Airport, Rio de Janeiro’s second largest airport.  Elsewhere, he remains less well-known, but his appearance in the 2016 Olympic Opening Ceremony brought his achievements to a wider audience!

So whether you think Alberto Santos-Dumont made the first flight or not, you can’t deny his impact on aviation.  If you too want to turn your dreams of flying into reality, train with us] at CTI PFT!