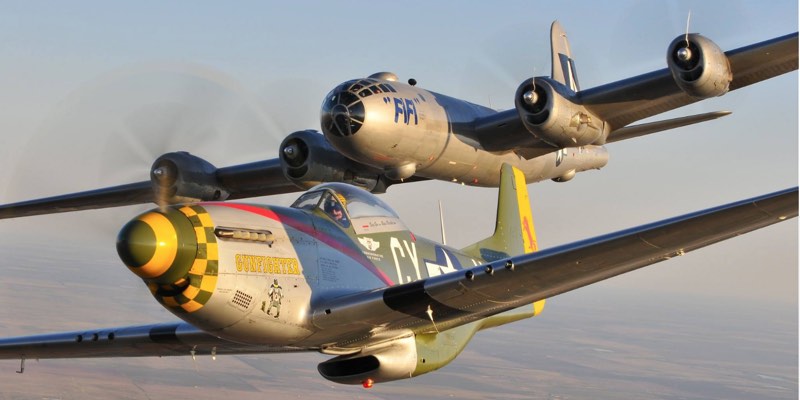 Meet FIFI, the world’s most famous B-29 Superfortress

Have you met FIFI, the world’s most famous B-29 Superfortress? If not, we have great news! From May 17th-20th, CTI Professional Flight Training will be playing host to Commemorative Air Force’s AirPower History Tour – and the legendary FIFI herself!

FIFI is one of the last two remaining B-29 Superfortresses still in flight. Owned by CAF, she now delights fans across the country on vintage air tours – meaning you too can experience an unforgettable flight in this piece of aviation history.

Boeing built FIFI in 1945, in the company’s Renton factory in Washington. She began life as an administrative aircraft, followed with a brief spell in ‘desert storage’ until 1953. She was then brought out again for active duty for five years.

When she was retired, FIFI ended up in the care of CAF from 1971. Years of careful attention and expert know-how have kept FIFI in prime condition, so generations of aviation fans can continue to experience a flight in this legendary aircraft.

The B-29 Superfortress in action

The B-29 is famous for being one of the largest aircraft in operation during the Second World War and remained in use throughout the 1950s. The model’s most infamous operation was carrying out the Nagasaki and Hiroshima atomic bomb drops which led to the end of WWII.

This four-engine, propeller-driven, high-altitude bomber was revolutionary in its day, due to its pressurized cabin and its dual-wheeled, tricycle landing gear. Even more advanced was its fire-control system, which controlled four remote machine gun turrets by computer. This meant that all four guns could be operated by just one gunner and one fire-control officer!

Your chance to fly in FIFI, the world’s most famous B-29 Superfortress

When the AirPower History Tour comes to CTI Professional Flight Training at Millington-Memphis Airport, so will your chance to experience the thrill of a flight in FIFI yourself. Sit in the seats of veterans and discover what it’s like to take to the skies in this beautiful behemoth.

There are four different seat types available, each set to give you an unforgettable experience of FIFI:

As well as meeting FIFI, you can also see the C-45 Expediter, the T-6 Texan, and the PT-13 Stearman in action on the AirPower History Tour this May. It’s bound to be an experience you never forget, so book your tickets now at www.airpowersquadron.org/millington-tennessee.airpowertour.org. You won’t regret it!