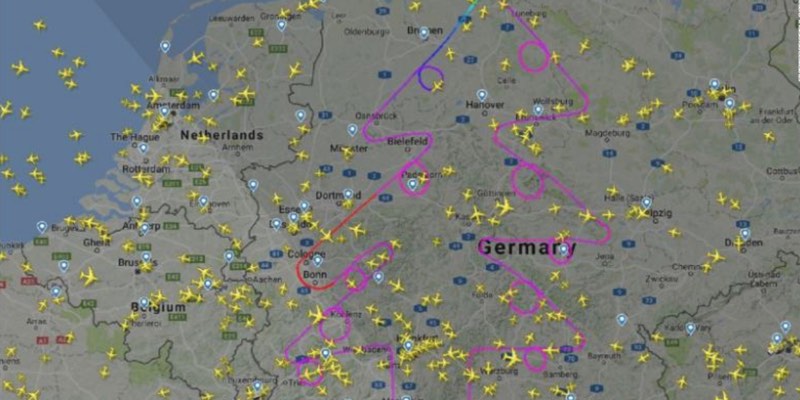 Spreading Christmas cheer: these German pilots drew a Christmas tree in the sky!

With Christmas nearly upon us, it seems we’re all getting into the festive spirit… these heroic pilots drew a Christmas tree in the world’s biggest passenger jet!

It must take a lot of skill to fly an Airbus A380 so precisely that you can map out a Christmas tree on the flight radar. It’s even got baubles – extra credit duly awarded!

This fantastic feat was completed by a team of test pilots flying out of Hamburg, Germany, earlier this month on behalf of Emirates. Their role is to test aircraft as part of their maintenance and certification, and they must have been brimming with Yuletide joy to intricately map out the points of each symmetrical branch and to loop around for every decoration!

Even more impressive is the fact that the team was flying the world’s largest passenger plane at the time – which can’t be easy to maneuver with such artistic precision. A double-decker plane, the Airbus A380 can carry approximately 500 passengers and is also renowned for being a quieter aircraft than other passenger planes in its league.

The creative team began in north Germany before heading down as far south as Stuttgart to ‘draw’ the trunk. A few other famous German towns and cities were passed on the way before the team went on to create the tree topper – a colossal candle which extended all the way up to Denmark!

Five hours and 22 minutes later, the team arrived back in Hamburg, having amazed everyone watching on the radar as well as news outlets with their Christmassy creation. And don’t worry if you weren’t watching; you can see how they did it courtesy of this gif from Flight Radar 24!

Whether you’re wowed by their incredible skill, their artistic vision, or simply their desire to offer an unforgettable Yuletide greeting to the aviation world, you can’t help but feel thankful that this team of pilots drew a Christmas tree for all of us to enjoy.

And with that in mind, we too at CTI Professional Flight Training wish you all a very peaceful and happy holiday season, wherever you are and whatever you’re doing. Season’s greetings!